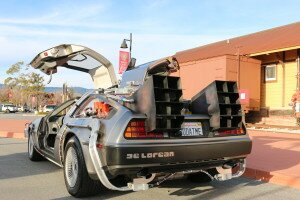 Great Scott! Doc Brown’s Time Machine Rental, a new party entertainment company in SLO is drumming up some business with two screen-accurate DeLoreans from the Back to the Future films.
Signed off on by the producer who supervised the original creations, and with licensed replica props, the time machines are available to rent hourly or by the day. Through some quirk in temporal mechanics, both the original DeLorean from 1985 and the 2015 modified “Mr. Fusion” edition are available.
Nicolette Muñoz, from the PR company contracted by Doc Brown to handle those pesky reporters who’d like to get their hands on the secrets of a flux-capacitor, said that in reality the company is hoping to make back some of the investment on the laborious conversion process. 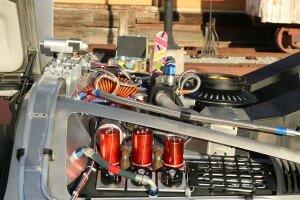 “He (the owner, a local business-man) is a real sci-fi fan with his house full of Star Trek, Star Wars, Back to the Future and other memorabilia,” said Muñoz, but his wife wasn’t enthralled with the sticker price attached to his latest hobby item.
A side business in party rental was just the thing for 2015, the 30th Anniversary of the release of Back to the Future. It’s also the countdown to the Oct. 21 arrival of Doc and Marty in the dystopian version of our present.
On that day, the crew that runs Doc’s machines will be somewhere in the Western U.S. (about as far as they want to take the cars on the road) at a lucky fans’ event for the anniversary. It’s not exactly an auction, but they’re vetting offers for the day now.
There are no plans to stop rentals and event cameos after that though, in fact they’d like to move the operation into the San Francisco Bay Area, where there is lots of demand but not too many 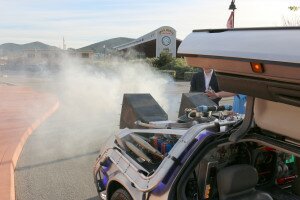 entertainment providers of this sort.
While the most likely demographics to be interested in having a part of film and “nerd” lore visit them for a day, would be among the 20-60-year-old set, the DeLorean’s last stop before swinging by the SLO train museum for a photo-shoot was a birthday party for a 5-year old. 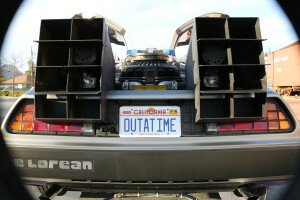 The “Little Marty” dressed as a mini- Michael J. Fox, reportedly knew every line and cue from the films, he just needed the ride.
With few 1985 DeLoreans left in the world and fewer still that haven’t gone through a fan-conversion, Muñoz said the SLO business is proud of the quality of their vehicles, which are made with 1960s-era aircraft parts and other fixtures that were common enough when the originals were built but hard to come by now.
The license plate “OUTATME” is as close as they could legally get to the movie registration and most of the buttons inside the vehicle do something, although we’re not sure what…
To find out about rates and event details call (844) DOC-BROWN (262-2769) and try not to upset the space-time continuum.